The Wednesday Walkers were formed in April 1986. The circumstances regarding the formation are interesting and demonstrate how successful ventures often start from the most humble of beginnings. Newly retired Ida Ashworth decided she would like to join a walking group so she contacted the Oldham Community Centre where she knew walking groups were based. 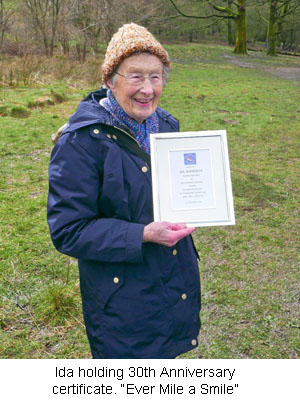 She was informed that indeed walking groups were based there functioning on Tuesdays and Thursdays but both groups were full and not accepting new members. A suggestion was made that she leave a notice at the centre and form a new group to walk on Wednesdays. This she did and thus a small group ventured forth facing the unknown. In those early days Ida led most of the walks and the location was simply by word of mouth but the foundation of friendliness and mutual support was firmly laid by those early members. Due to her own experiences, as the club became successful and grew, Ida also made a point of making sure that the club was open to all.
As the years progressed the club did indeed begin to grow, mainly by word of mouth, but the underlying philosophy remained the same. If the growing numbers caused problems, as indeed happened when public transport was involved, then it was up to the club to solve the problems. Thus, eventually, two walks were offered each week and as cars were becoming more widely available the areas to be explored became more varied. Also in the 1990s a Residential Week was established so that the whole group could have time together.
The modern club which has more than 200 members, most of them active, now offers four walks each week ranging from 4-6 miles to 10-14 miles catering for a wide range of abilities. Every quarter there is a 'get together' of all groups where we all descend on a centre for a joint lunch. Each June there is also a coach walk where all groups walk in an area not normally available to us. The highlight for many people is the Residential Week which has taken place at various places including Cromford, Keswick, Patterdale, Grasmere, Scarborough, Grange over Sands and Church Stretton.
Even with our large numbers we pride ourselves on being a friendly club, free of cliques, and although we recognise the fact that we have to be well organised in order to function we will hopefully never lose sight of the fact that we are here to help each other and ensure that the experiences we provide are enjoyable and fruitful.